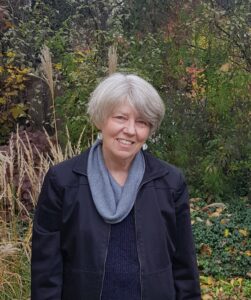 On February 23, Judi Coburn, retired TDSB English and History teacher discussed her latest book, Rebellion’s Daughter as part of our ongoing “Luncheon” Speaker Series. The presentation took place on-line and was recorded. The recording is available to members for a limited time at the following link:

In 1835 a fifteen year old Eunice flees from an abusive father and finds work and a political education at the farm of reform supporters. She learns to read, develops her own point of view and falls for a young man. Eunice moves to her new husband’s family farm in the Niagara District, close to William Lyon Mackenzie’s rebel camp and is soon dressing as a boy in order to assist a group of rebels. Ultimately, impulsiveness leads to her theft of a wealthy man’s horse and to her arrest.

She is incarcerated in Kingston Penitentiary in 1839. Eunice becomes part of a community of poor, female prisoners, some just children, subjected to whippings and solitary confinement in the ‘black hole.’ Eunice recognizes that the rebellion has completely ignored the problems of these lower class women, and, after her release from prison, understands that there is much more to be done.

Judi taught History and English in Toronto high schools until 2005. In 1974, she worked for Women’s Press and was one of the coordinators and authors for Women at Work, Ontario,1850-1930, which won the 1974 City of Toronto Book Award. Her article “I See and am Silent, a History of Nursing in Ontario” was reprinted in Health and Canadian Society, Fitzhenry and Whiteside, Toronto, 1981.

She has worked on various educational projects for the Women’s Press and for the York Board of Education:

In 1998, she published her first historical fiction, The Shacklands, set during the early 1900 wave of immigration to the area of West Toronto. Published by Second Story Press, Toronto, the novel was nominated for The Geoffrey Bilson Award for Historical Fiction.

In 2013 Judi received the Geraldine Grace and Maurice Alvin McWatters Visiting Fellowship to research the story of Eunice Whiting at the archives at Queen’s University.

Rebellion’s Daughter is available at

HOME NEWS EVENTS WHO WE ARE AFFILIATIONS