Pandemic: Who Will Pay – A Webinar for Seniors and others on Canada’s unfair tax system 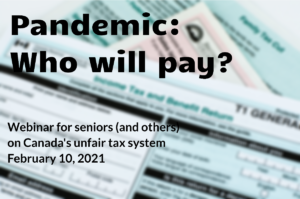 The richest one per cent have been making out like bandits during the pandemic, but will they pay their fair share of the taxes needed to cover our governments’ COVID-19 relief programs and health system costs? Not if they can help it!

We can press for greater fairness in taxation when we are well informed.
Register for a Zoom forum on Canada’s unfair tax system, co-sponsored by the Toronto and York Region Area Council of the Congress of Union Retirees and the Toronto Retiree Network.

The webinar will be moderated by Lester Brown, formerly of the Canada Revenue Agency (CRA), with Sheila Block,  senior economist with the Canadian Centre for Policy Alternatives and Toby Sanger,  director of Canadians for Tax Fairness.

Space is limited! Register now for an informative and stimulating discussion. You will then receive a Zoom link to the event. Click the following link to register:

Sheila Block is a senior economist and a public commentator with the Canadian Centre for Policy Alternatives. Sheila’s research specializes in Canada’s labour market, public finance, and inequality. She has worked as both a political advisor and a public servant in the Ontario government and as an economist in the labour movement. Sheila has an Honours B.A. in Economics from the University of British Columbia and a Master’s degree in Economics from the University of Toronto.

Toby Sanger has been director of Canadians for Tax Fairness since October 2018. Prior to that, he worked as the economist for the Canadian Union of Public Employees, chief economist for the Yukon government, as a college lecturer in economics, principal economic policy advisor to the Ontario Minister of Finance, economic researcher at the House of Commons and as a consulting economist on labour, environmental and First Nations issues. He has a B.A. in economics from McGill and M.A. in Economics from Dalhousie University.

For more, see the links below: